The PharmaSUG conference is put on by a team of all volunteers. These are individuals who have a passion for the industry and the work they do. They donate their time and effort to make the conference a success. Because of this dedication we would like to recognize these individuals in a series of “Getting to Know Your PharmaSUG Committee” articles. In the articles, we will highlight these individuals for their hard work, knowledge and the responsibilities they have to the conference. 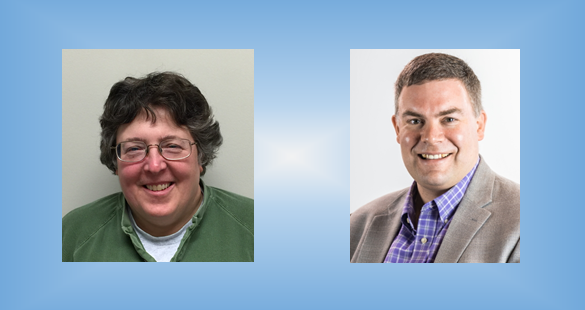 In our next article of the series “Getting to Know Your PharmaSUG Committee”, we would like to introduce you to Nancy Brucken and Josh Horstman. These two individuals are instrumental in making sure the website is up to date so that our users have the most current information pertaining to PharmaSUG.

Nancy grew up in Cleveland, Ohio where she developed a love for the Ohio State Buckeyes. Although she currently resides in Ann Arbor, MI she remains a big Buckeyes fan. Nancy is a sports fan in general and lives a very active outdoor life playing volleyball and softball, canoeing, and skiing (yes, even in the winter she is outdoors). She loves playing, coaching and officiating volleyball matches, and even has a side gig as the electronic scorekeeper for the University of Michigan volleyball team. She also enjoys sailing and was so excited to be able to purchase a barely used 1976 Sunfish last summer.

Nancy’s first project in the pharmaceutical industry required translating comments from German to English and creating documentation for a set of SAS macros that produced standard lab tables. Unfortunately, the very little German Nancy knew was not used in the lab macros.

Even with all that she has going on, Nancy still finds time to participate in the SAS community. She is part of the SAS Global Forum 2020 CAT/CDT team, and is president of the Michigan SAS Users Group. She also is an active member of the CDISC ADaM team, an authorized CDISC ADaM instructor, and co-lead of the ADaM ADQRS sub-team.

Josh is an independent statistical programming consultant from Indianapolis. Born and raised in central Indiana, he began his career there with Eli Lilly and Company. Although originally in a pure IT role, he quickly gravitated towards statistical programming, learning SAS and earning his M.S. in statistics along the way. In 2012, Josh went solo as an independent consultant through his own company, Nested Loop Consulting. He specializes in analyzing clinical trial data, and his clients have included major pharmaceutical corporations, biotech companies, and research organizations. In addition to programming, Josh is a frequent presenter at PharmaSUG, SAS Global Forum, and other industry conferences. Josh regularly teaches SAS training classes, both at conferences and for private clients, and is currently working on his first book through SAS Press.

Josh lives with his wife and four children and enjoys board games, family road trips (45 states down, 5 to go!), skiing, camping, and visiting national parks. He has hiked to the top of Long's Peak in Rocky Mountain National Park, to the top of Half Dome in Yosemite National Park, and to the bottom of the Grand Canyon twice. He sings in a church choir and plays piano and saxophone. Josh is an avid Star Trek fan and once went on a cruise with William Shatner and other cast members. He’s also been trying for years to realize his dream of appearing on the television game show, Jeopardy.

We will continue to highlight the conference committee over the months leading up to PharmaSUG 2020. If you would like to see who else is on the team, visit our Conference Committee page.